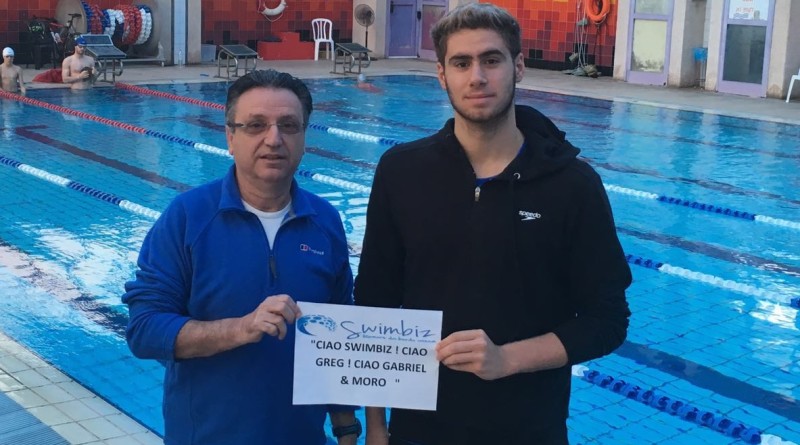 During Netanya European Championships, he was impressed by those two Italians who gained metres and acclaims at each stroke. “After Baku European Games, and Marc Hinawi’s bronze in 1500 freestyle, I was looking for a foreign country to give him the chance of a stage where he could train with top swimmers, in order to reach Olympic ciriterion”  Israelian coach Meir Loya tells Swimbiz.it. Gregorio Paltrinieri’s world record, and the second place of an amazing Gabriele Detti, was like a revelation. Meir met with their coach, Stefano Morini, who agreed to join Marc in a swimming camp in Ostia during 3 weeks.  “Italian Swimming Federation and ‘Moro’ accepted us with love and warms”. In the beginning “We were shocked when we saw the workouts and the performance of the Italian swimmers – but after the training camps in Ostia, Messico and Miami – I learned that the human body can adapt this hard workouts. But the main emphasis is the quality of the performance. The fact that the élite long distance swimmers of the country train together at the same place with a very professional coach in this distance is great”. Marc, Meir and the Italian group created a good friendship “I think that the Italian mentality and the Israeli mentality are very similar. Also the human  temperament. We have all of the conditions to succeed and to cooperate in any field, especially in swimming professional cooperation”. And he really wants to forget no one in his greetings "The Italian Swimming Federation, with President Paolo Barelli, and Mr Roberto Del Bianco, Mr Marco Bonifazi, Mr Cesare Butini, Mr Walter Bolognani, Mrs Simona Spurio Schiavoni, Mr Fabrizio Ghitti. Coaches Mr Stefano Morini e Mr Christan Galenda. And than, of course, swimmers Gregorio Paltrinieri, Gabriele Detti, Nicolangelo Di Fabio, Diletta Carli, Martina Caramignoli, Stefania Pirozzi e Ilaria Cusinato"

An almost spiritual empaty. Indeed, even religion may influence a sportsman’s life “Marc is a Christian and before every start on the blocs he crosses himself twice – some values of Judaism may be found in sport too - positive thinking ,self-belief, being a good person and never giving up. But also hard and professional work, and talent”. However, every swimmer may be influenced by his own religion or customs, such as Brazilian Felipe França who uses starting bloc as an altar, praying before races “In Israel, some some go to the western wall in Jerusalem to put a scrap of paper in the wall and make a wish, or go to a synagogue, or kiss the mezuzah before entering the swimming pool . Some other, simply, make a request in their mind”.

Will Marc Hinawi become a competitor for Italian swimmers at Tokyo 2020 Olympics? “First of all, Marc has to make the criterion for Rio 2016. After that, we will think about the next step”. Surely, after Meir saw  closely how Gregorio Paltrinieri trains “I believe that the combination of kindness, amazing physiological capabilities, training capabilities and the ability to explode at the right moment will lead him to higher places. After the time spent together, I may not be so objective, but the meeting with this amazing person and swimmer has made me the number one fan  of Gregorio Paltrinieri. And Sun Yang has to be worry…”.